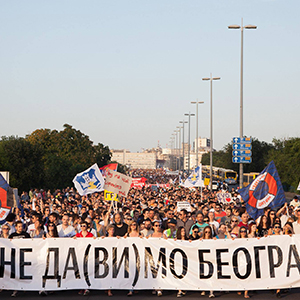 The citizens’ initiative “Don’t Let Belgrade D(r)own” (“Ne da(vi)mo Beograd”) was formed in 2014. as a reaction to the imposition of the “Belgrade Waterfront” project (“Beograd na vodi”). Since then, they have been organizing numerous actions, collecting and spreading out much needed information about this project of “national significance”, actively using all the institutional ways of citizen participation as well as calling people out on the streets. These protests that started as a reaction to an urban development project, have recently drawn up to 25,000 people, making them among the largest protests in the recent Serbian history.

“Ne da(vi)mo Beograd” initiative comprises of people of different profiles, professions, and beliefs, who share the feeling of responsibility for their city, its processes and problems, its present and future. Their activities have one aim in common: stopping degradation and depletion of the city space done in the name of ostentatious urban and architectural mega-projects in Belgrade as well as in other cities in Serbia. They aim to reassess urban and cultural policies in view of sustainable development of cities, and argue for a more just distribution of common resources, while enabling the inclusion of citizens in the development of their environment.

Ksenija is an architect and a member of the Ministry of Space collective.